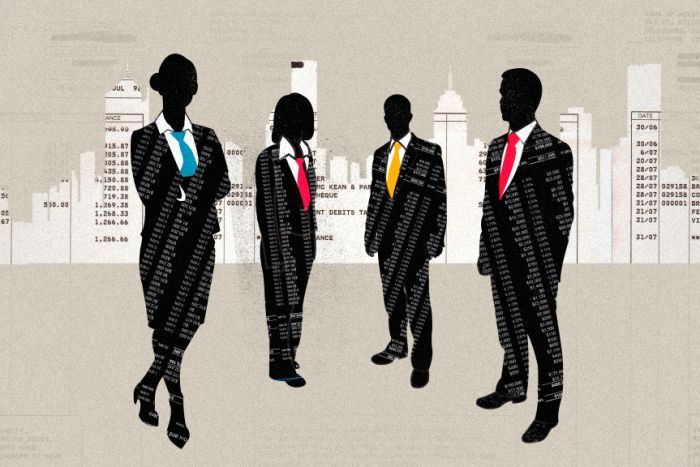 RELATED STORY: The big four spent up to 200 years swallowing other banks, but Hayne may cause regurgitation
RELATED STORY: Theft and greed is a banking philosophy that even Hayne report may not change

There’s a lot of anxious people in Australia now.

Bankers, financial planners, mortgage brokers, insurance sellers and many others who work in the financial services sector know that D-day is looming.

On Monday, the Government will release the final report of the banking royal commission, which it received from Kenneth Hayne on Friday.

If that report backs up the strength of the royal commissioner’s language in his interim report back in September, the financial services community will have a lot to be anxious about.

Will the royal commission have a lasting impact?

Because, as we saw at the commission in all its gory detail, Australians have been ripped off to the tune of billions of dollars and many lives have been ruined by a sector focussed on itself and not its customers.

The royal commission report will be unveiled just weeks after the Productivity Commission revealed how much money Australians are missing out on in their retirements.

Up to half a million dollars, according to the commission, which the Association of Superannuation Funds of Australia says is about eight years of comfortable living for a couple.

Among many of the poorer-performing funds are the “for profit” funds, or “retail funds” as they’re known, operated by the banks, AMP, IOOF and others.

As their name implies, they exist to make a profit for the company that runs the fund.

Retirement outcomes for customers of those funds are a secondary concern and are one of the key battlegrounds with so-called industry funds, which are a partnership between employers and unions for the benefit of their members.

And it raises the question, should Australians be comfortable with their hard-earned superannuation contributions being paid to the shareholders of banks and other large institutions?

How much are bank investors earning from super?

The banks don’t release detailed figures on how much they collect in superannuation contributions, but if you take Westpac, for example, its wealth management division, BT Financial Group, earned 8 per cent of the bank’s income in 2018.

The bank paid shareholder dividends of $6 billion, and, assuming the capital requirements for BT are consistent with the other divisions of the bank, it’s not unreasonable to assume it was responsible for around 8 per cent of the dividend.

How did the banks become so big?

The big four bank’s have a stranglehold on Australians’ personal finances, from cradle to grave. But how did they become so dominant and is their position under threat?

BT Financial Group has products other than super, so not all that nearly half billion dollars was generated by super.

But, when you add the other three big banks and all the other “for profit” players in the super space, and using Westpac as a guide, it’s reasonable to postulate that more than $1 billion a year of superannuation money is being paid out to shareholders in the form of dividends.

That’s more than a billion dollars a year not being used to generate retirement incomes for the people who earned that money.

Given that surveys consistently show that the overwhelming proportion of direct share ownership is by the wealthiest people, it’s a big redistribution of wealth.

The flip side is that super funds are among the institutions invested in banks, so some of that money will come back into the super system, including, ironically, to the banks and AMP’s arch rivals, industry funds, which also invest in banks.

Industry funds also have their own laggards

And speaking of industry funds, they too have reason to be anxious.

Royal commissioner Kenneth Hayne has slammed the banks’ culture of greed as the root cause of much wrongdoing.

With its call for only the 10 top-performing funds to be allowed to take part in the $700 billion default space (where employers choose the fund for employees who don’t), the Productivity Commission made it clear that the poor performers should get out of the industry.

Like the banks, the industry super fund sector is also at risk of being seen to put itself ahead of the interests of its customers.

Just because you run a union, or a company, doesn’t by definition mean you run a good super fund.

While industry super funds clearly outperform their “for profit” counterparts at the top, there are plenty of ordinary performing industry funds further down the ladder.

If the industry fund sector is serious about looking after the retirements of workers, it will weed out the laggards.

A failure to address this issue could see the industry fund sector accused of being more interested in protecting the trustee jobs of union and company bosses, rather than the retirements of union members.

Self-interest not dissimilar to what the royal commission has revealed in the banks.