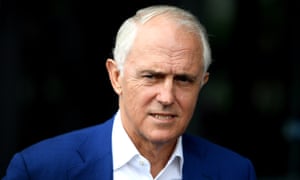 Malcolm Turnbull has said he regrets his delay in calling the banking royal commission, admitting he now believes “we should have got on with it earlier”.

The treasurer, Josh Frydenberg, has so far avoided replying when asked whether the government was sorry it had not called the commission sooner, after voting against its establishment 26 times – instead pointing to what he said were Labor’s “failures” while in government five years ago.

But his former leader openly admitted he had got it wrong, telling reporters at a doorstop interview in Melbourne he regretted not establishing the commission earlier, while distancing himself from individual responsibility.

“I do,” he said, when asked if he regretted his opposition.

“I think we should have got on with it earlier. It was – look, the reason I didn’t support a royal commission and the government didn’t, and that was a collective view of the government, not just mine, was because I could see what the problem was, a failure of responsibility and trust, and I wanted to get on and deal with it immediately.

“I didn’t want to have the delay of the royal commission. In a sense, we’ve ended up with both approaches being used. We did get on with a lot of very important reforms and I want to congratulate Kelly O’Dwyer, in particular, for leading the charge on those.

“Some very important changes were made, in terms of regulation, in terms of banking executives’ responsibility, so a lot of big reforms were made to address the problems.

Speaking after Turnbull’s press conference, Scott Morrison said he had expressed regret last year, and was now focusing on the future.

“I expressed last year my own regret as treasurer when it came to being very focused on the issues of financial systems’ stability, but I expressed my own regret at some of the human factors that needed greater consideration in terms of calling the royal commission,” he said.

“But let me be frank, I called for the royal commission. We introduced the Australian financial complaints authority, we introduced the additional resources and support for Asic.

“We acted on the financial systems inquiry that we implemented when we came to government in 2013. As a government, we have been taking action on this issue from the day we were elected.”

The former prime minister was less forthcoming when it came to Morrison’s chances of winning the next election, saying he was “in with a chance”.

Turnbull was much more effusive in his praise of the newly independent Julia Banks, who has announced she will challenge Greg Hunt in the Victorian seat of Flinders.

“Every election can be won and all Australian elections are close. I wish him all the best,” Turnbull said of Morrison.

“Julia Banks is an outstanding parliamentarian. She is a great – she came to parliament with a life of experience as a lawyer in the business world. She is really an outstanding representative.

“She’s explained why she left the Liberal party and she’s done so in her own words and I respect the decision she’s taken. I believe that the people of Flinders will have a very stimulating contest between her and Greg Hunt and no doubt the other candidates.”

Turnbull has previously admitted he could have saved himself “political grief” by calling the royal commission earlier.

On Tuesday he said he had been “shocked” by some of the cases that emerged during its hearings. “I did not believe the cultural failures had been as bad as that,” he told Sky News.

Labor was the first of the major parties to reverse its opposition to a royal commission into the banking industry, calling for one in April 2016, a move which was soundly rejected by the government, including by Turnbull and Morrison.

An internal party revolt, led by the Nationals senator John Williams, forced the government to announce a royal commission in November 2017, which Morrison said was a “regrettable but necessary” move.

The government has said it will “act” on all 76 recommendations put forward by the commissioner, Kenneth Hayne, although it has hesitated on following all the way through with the “user-pays” recommendation for mortgage brokers.

Frydenberg said that was because of concerns that mortgage brokers could be put out of business, handing more power to the big banks.

But the shadow treasurer, Chris Bowen, accused the government of using “weasel words”.

“They attempted to avoid the royal commission, didn’t even believe in it. Even when they announced it, said it was regrettable. Voted against it 26 times. Their heart is not in it.”

The National Australia Bank bosses Andrew Thorburn and Ken Henry, who came in for particular criticism from Hayne in his final report, have joined other bank leaders in promising change.

“The final report references matters concerning the NAB Group which have been referred to the relevant regulator,” Thorburn said in a statement to the Australian Securities Exchange on Tuesday. “We will engage constructively on these matters.

“In addition, the commissioner has expressed his view that we at NAB may not be learning the lessons we need to from the past and, in particular, that we don’t know what the right thing to do is.

“As the CEO, this is very hard to read, and does not reflect who I am or how I am leading, nor the change that is occurring inside our bank. While we have made mistakes, I believe there is a lot of evidence that we are making sustainable and serious change to once again regain the trust of all our customers.”

Thorburn said he had cancelled planned long-service leave to deal with the fallout.