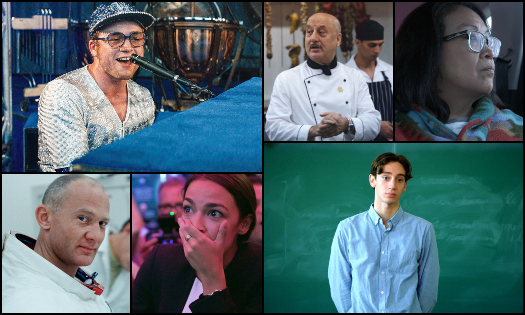 2019 is a year to savour artisanal offerings and home-cooked meals. The only major studio movie of the year that’s even worth talking about, let along seeing, is the Elton John biopic Rocketman. Instead, the movies are all about the small stuff this year: festival fare, independent works, and documentaries.

By this point in 2018, I’d already seen what would go on to be my favourite film of the year, Won’t You Be My Neighbor?. I don’t think the #1 film of 2019 is on this mid-year list, but any number of them could wind up in the final top ten. Most of the best Canadian films of the year had already screened by the midway point of 2018 as well. This year’s crop of Canadian films is much, much stronger with four out of ten films on this list offering titles to catch on Canada Day. Others, like Mouthpiece, The Grizzlies, and Giant Little Ones were all on the list at some point in the process of mixing, shuffling, and considering a few ties. Three of the year’s best festival offerings—One Child Nation, American Factory, and For Sama—have yet to be released, but will be in the coming months, so expect to see them on more lists by the year’s end.

But for now, here are my picks for the ten best films of the year so far:

This year’s surprise Best Picture winner at the Canadian Screen Awards really needs to be seen. It’s a remarkably poignant and confident dramatic feature debut for director Geneviève Dulude-De Celles. Intimate and observant, A Colony lets audiences enter the mind of a young woman named Mylia, played by an outstanding Emilie Bierre, as she struggles to fit in at high school until she befriends Jimmy, a young Abenaki boy from the reserve outside town. Dulude-De Celles draws some excellent performances from a cast mostly comprised of young actors and it truly is refreshing to see the experiences of kids and teenagers treated with such intelligence and maturity. It’s very exciting to see this director establish herself as an auteur in the making.

The outstanding technical accomplishment of Apollo 11’s restoration alone merits serious consideration for next year’s Best Documentary Feature Oscar. This archival masterwork brings to the screen some unseen images of the moon landing, but the wonder of the film isn’t only its impeccably refurbished images, which look flat-out amazing on IMAX. The thrill of Apollo 11 is the behind-the-scenes action of the unsung players who had a hand in making history: the computer geeks, the ground crews, and the spectators who lined up to watch the show. It’s an absolutely thrilling experience—just the kind of jaw-dropping, awe-inspiring feat of wonder that Armstrong and his team deserve.