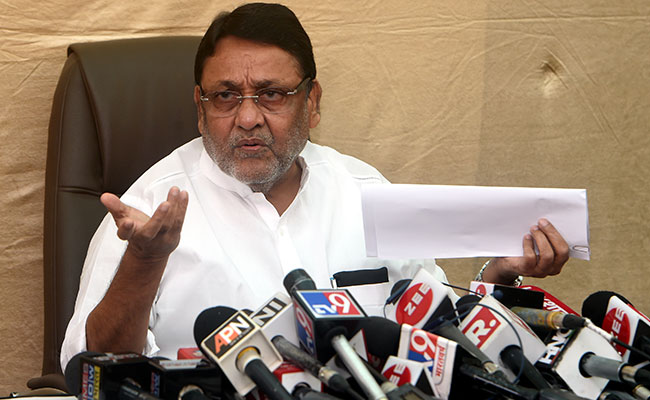 The Bombay High Court on Tuesday said that it seems that Maharashtra minister Nawab Malik has “wilfully breached” his undertaking given to the high court last month on not making any public statements against Narcotics Control Bureau’s Mumbai unit chief Sameer Wankhede and his family members.

A bench of Justices SJ Kathawalla and Milind Jadhav directed the senior NCP leader to file an affidavit explaining why the court must not take any adverse action against him for the breach of undertaking.

The bench was hearing an application filed by Sameer Wankhede’s father Dnyandev Wankhede alleging that despite assuring the high court last month that he will not make any public statements against the Wankhedes, Mr Malik continued to make such defamatory statements.

He had approached the high court on Monday through senior counsel Birendra Saraf, seeking an urgent hearing.

On Tuesday, Mr Saraf submitted portions of an interview that Mr Malik had given recently to a regional newspaper wherein he had made the alleged defamatory comments.

Mr Malik’s counsel Karl Tamboly told the high court that he had given the said interview as the spokesperson of his political party and not in his personal capacity.

The bench, however, held that the said comments were in breach of his undertaking given to the court.

“This is impinging on our order (recording Malik’s undertaking not to tweet or make public statements against the Wankhedes.) He (Malik) is over-reaching our order. Before we take any action against the respondent, we direct him to file his affidavit setting out as to why action should not be taken against him for wilful breach of statements/undertaking,” it said.

The matter was posted for further hearing on December 10.

On November 29, the high court had quashed and set aside the November 22 order of a single-judge bench that had refused to restrain Mr Malik from making statements against the Wankhedes. At that time, Mr Malik had agreed that he will not make public statements and post anything on social media against the Wankhedes till the disposal of the defamation suit filed by Dnyandev Wankhede.

The high court had then asked Mr Malik to file his detailed reply to Dnyandev Wankhede’s suit seeking interim restrain against him by December 9. The Wankhede senior was told to file a rejoinder (additional) affidavit by January 3, 2022.

Dnyandev Wankhede had filed a defamation suit against Mr Malik and sought damages of ₹ 1.25 crore for allegedly posting defamatory posts against him and his family members. He has claimed that Mr Malik had started a smear campaign against the Wankhede family members after his (Malik’s) son-in-law was arrested by the NCB in a drugs case.