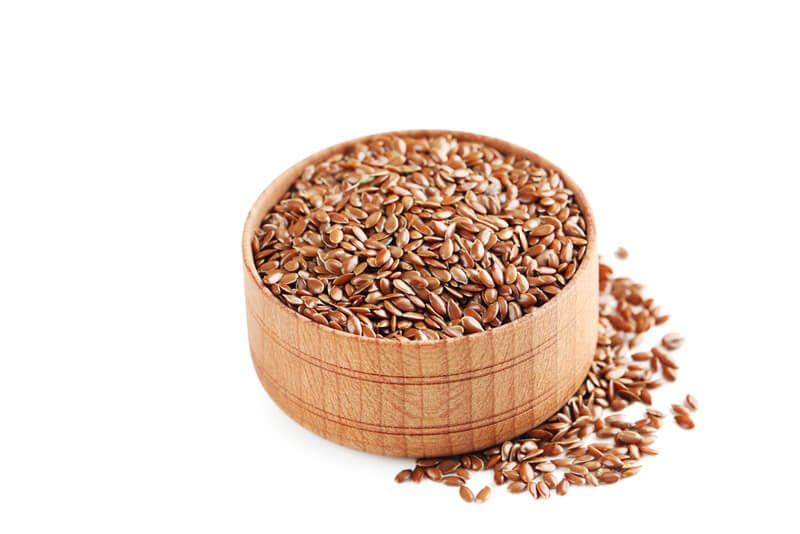 This article will discuss the effectiveness and practicality of flaxseed oil as a hair loss treatment.

The short answer is that there is some very encouraging evidence on flaxseed oil being an effective hair growth agent.

But first, you will learn what flaxseed is and why it is good for overall health. You will then learn effective ways to start using it today to improve your hair health.

What is Flaxseed Oil?

Flaxseed oil is extracted from whole flax seeds (also known as linseed) and is used in a variety of ways.

This mildly nutty oil is packed with omega-3 fatty acids and lignans and is considered one of the more nutrient-dense oils on the market (1).

Aside from its delicious taste and nutritious contents, the flax plant is also useful for its fibrous stem. Flax fiber can be commonly found in linens, twine, tea bags, and even banknotes.

It is largely produced in the Americas (with Canada being the leading country of production), but can also be found in Asia, Africa, Europe, and Oceania (2).

Flax has been widely used throughout the world and throughout history. It is highly esteemed for its many medicinal and industrial uses (3).

It is no wonder that flaxseeds are the natural supplement of choice for health enthusiasts. Take a look at some of the more common benefits associated with flaxseed oil below.

Flaxseed oil is a great source of omega-3 fatty acids and, more specifically, alpha-linolenic acid (ALA).

This particular type of omega-3 fatty acid has been shown to reduce inflammation. This makes it a helpful supplement for those with chronic, inflammatory conditions (4).

If you want to prevent cell damage and aging, then antioxidants should form a regular part of your diet.

Flaxseed oil is a particularly powerful source of antioxidants. It is rich in phenols, flavonoids, and lignans, all of which are powerful antioxidants.

Alpha-linolenic acid, as discussed above, is also a powerful antioxidant.

There is at this point a substantial body of research on the cardioprotective effects of flaxseed oil’s components, and particularly ALA (5).

Regular supplementation with ALA can also decrease the risk of heart attacks. There is also some evidence that ALA levels are inversely related to the incidence of stroke (6).

In addition to the omega-3 fatty acids found in flax, which can help to reduce inflammation throughout the body, flax is an excellent source of fiber.

Fiber is essential to gastrointestinal health. Its adequate consumption can help increase the regularity of bowel movements and prevent the development of conditions, such as diverticulitis (7).

Note, however, that while the actual flax itself is rich in fiber, its oil is devoid of fiber.

What About Hair Loss? Flaxseed Oil and DHT

In men with Androgenetic Alopecia (AGA), also known as male-pattern baldness, it is believed that increased susceptibility to the androgen (male hormone) DHT plays a key role (8).

DHT attacks the hair follicle, leading to the progressive shortening of the follicle growth phase. This is the phase in the hair cycle during which the hair actually grows (9). Eventually, the follicle shrinks, and its growth phase shortens so much that the hair cannot even grow through the scalp.

This is called hair follicle miniaturization, and it is the hallmark of androgenetic alopecia.

Apart from hair follicles, DHT also attacks the male prostate. This leads to an enlargement of this organ and all sorts of unwelcome symptoms, like problems with urination.

This is why drugs like finasteride or dutasteride that target prostate enlargement also work against hair loss, though at the cost of potentially unpleasant side effects.

There are some encouraging animal studies to suggest that flaxseed oil has potent anti-DHT properties. These are without the side effects associated with prescription medications.

The scientists did not directly measure the levels of DHT in this study. However, the consumption of flax resulted in a significant reduction in testosterone levels, the precursor androgen of DHT.

The researchers attributed these antiandrogenic properties to the presence of fatty acids, as well as the lignans and flavonoids that are so abundant in flaxseed.

A similar study in 2015 gave similar results (11). The scientists behind this study treated the rats with testosterone to induce abnormal growth of the prostate. Some of the rats were given a diet of milled flaxseed, while others were treated with finasteride, the most common anti-DHT prescription medication.

The researchers found that flaxseed in the animals’ diets induced similar effects to finasteride, namely a reduction in markers of prostatic growth like prostatic vascular endothelial growth factor (VGEF). As its name suggests, VGEF is a protein that stimulates the formation of blood vessels and is sometimes implicated in abnormal tissue enlargement.

The findings of these two studies were further corroborated by a 2017 paper published out of Brazil (12). Rats in this study were again treated with testosterone to induce artificial enlargement of the prostate. The prostates of rats who were concurrently fed with a diet rich in flaxseed were largely protected compared to control rats who were fed a diet rich in milk protein.

Interesting as these animal studies are, the question naturally arises: what about humans? Is there any evidence that flaxseed can block DHT in humans?

A small 2004 study found that daily flaxseed supplementation, in combination with a low-fat diet, resulted in substantial PSA reductions. The 15 men in the study had enlarged prostates and were at high risk for prostate cancer (13).

PSA is a protein that the prostate gland produces, and high levels signal an increased risk of prostate malignancy.

The PSA in 2 of these men dropped to an extent that they did not need to undergo a scheduled repeat prostate biopsy after 6 months. But the 13 men who did undergo the scheduled biopsy showed a significantly decreased rate of cell proliferation in the prostate epithelium.

Finally, a much larger, placebo-controlled study was published in 2008 on 78 men with benign prostate enlargement (14). The researchers looked at the effects of four months of daily supplementation with a flaxseed extract. They found that the supplementation resulted in statistically significant and clinically meaningful improvements in a range of symptoms.

The authors of this study compared the magnitude of the clinical improvement witnessed in their study to that reported in other studies via the use of prescription anti-DHT medications (like finasteride). The improvements in the severity of symptoms and overall quality of life were comparable.

In summary, flaxseed does seem to possess potent anti-DHT activity. The best evidence for this is all the published research that agrees on its effectiveness as a protective agent of the prostate.

In principle, therefore, this food looks very promising as a possible hair loss treatment. This could be either as a standalone or in combination with other natural supplements.

We looked at the evidence regarding flaxseed and DHT. What about the direct research on flaxseed and hair growth?

In 2014, a 3-month research study was performed on a group of 16 rabbits (15). The researchers split them into two groups of eight. They gave one group regular feed (control), and to the other, they gave regular feed plus crushed flax (test).

Each month, they shaved a 10x10cm patch of hair from the back of each rabbit. Prior to this shave, however, they took measurements to determine how well the hair had grown in the same shaven patch.

At the end of the study, the results were clear: flax supplementation had a positive effect on both the length of the hair (with a 26% increase seen in the third month), as well as the width and weight.

As the researchers concluded, there is no doubt that the use of flax aided in the growth of hair. While this study was only three months long, even that short period of time was enough to see positive results.

Are There Any Side Effects with Supplementation?

Prior to starting a new supplement, it is best to speak with your physician about any concerns.

While flaxseed oil is a safe and healthy supplement for most individuals, there are a few things to keep in mind.

Large, daily doses of flaxseed oil (30 grams and higher) can cause bloating, loose stools, and diarrhea. This is something to take into consideration when supplementing with the oil.

Women who are pregnant should consult with their doctor prior to supplementation. There are some suggestions that flaxseed oil is linked to pre-term labor. As there is not enough research available at this time, women who are breastfeeding should also avoid supplementation.

If you experience symptoms of an allergic reaction after ingesting or topically applying flaxseed oil, such as shortness of breath, hives, or nausea and vomiting, it is best to stop supplementation immediately and seek medical attention.

Though the chances of this happening are very rare, in theory any food can cause an allergy. So there will be some people out there who will be allergic to flaxseed and its oil.

How To Add Flaxseed Oil to Your Hair Care Routine

For those suffering from male-pattern baldness, there are three ways you can use flaxseed oil to give your hair growth a boost.

Pick one, use all three, or mix and match to create the hair care routine that is right for you.

Apply Directly to Your Scalp

One of the simplest ways to include flaxseed oil into your regular hair care routine is to apply it directly to the scalp.

Another advantage of flaxseed oil, as is the case with many plant oils, is that it can fill the gap between the cuticles of the hair and seal them. This can leave your hair looking shiny while preventing breakup and frizz.

For this reason, in addition to applying it to the scalp, it is worth working the flaxseed oil all the way down your hair.

Add It To Your Diet

You can add this versatile oil to any and all of your favorite recipes and meals.

Add a bit of honey and lemon to 1 tablespoon of flaxseed oil. Enjoy it as a dressing or use it to stir fry your favorite blend of vegetables.

Despite all its nutrients, flaxseed is a rather difficult food to absorb. That is why we recommend you consume the oil. If you prefer the solid form for the added fiber, you can grind it into a powder first.

For those with low-fiber diets, it is best to start out with smaller doses of milled flaxseed. You can then slowly work your way up. This will prevent the majority of gastrointestinal upset.

Make Your Own Flaxseed Oil Conditioner

Homemade conditioners are simple, affordable, and tailored to fit your exact needs.

One of the easiest and cheapest methods for making your flaxseed oil conditioner involves only two ingredients: flaxseeds and distilled water.

Add a quarter cup of whole flaxseed to 2 cups of distilled water, and boil. After boiling, lower the heat and stir for five to 10 minutes.

At this point be on the lookout for the mixture to thicken. When you notice it sticking to the spoon it means it is ready. Pour it through a strainer and you have your gel.

You are probably not going to use all of it one go. For this reason, refrigeration is very important to prevent it from going bad. After you have refrigerated it, the gel is good to use for another one to two weeks. Be on the lookout for the smell going off, and store in an airtight container.

As for applying the gel, you can apply it to damp hair and leave them to dry naturally. It will leave your hair looking shiny, healthy, and overall amazing.