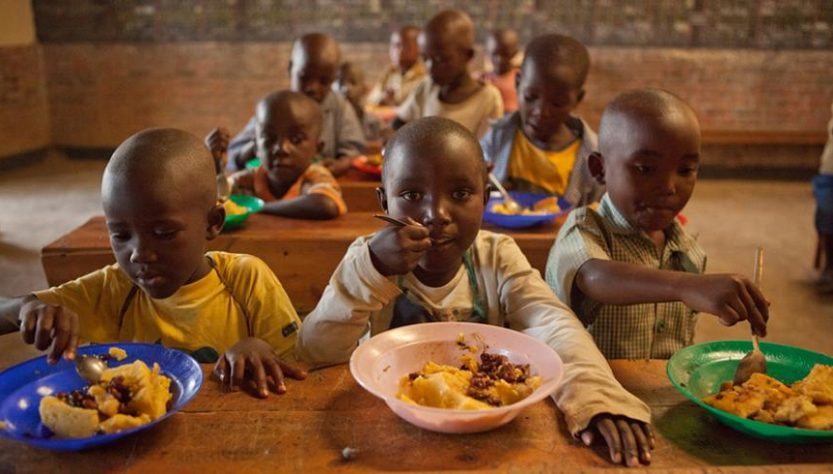 Recently, the Ministry of Education embarked on a new effort, seeking to ensure that all school-going children get at least half a litre of milk per day on their school meal menu.

The development means that a student will consume about 180 litres of milk per year, which is well above the 80 litres that Rwanda targets by 2020, according to the National Dairy Strategy.

The initiative, the ministry stated, is intended to help children get nutritious and balanced meals that the body needs to stay healthy.

When it comes to maintaining good nutrition, young people are considered most—in fact, experts say without proper nutrition, a child’s performance and learning in general may be altered in one way or another.

Research has shown that students are able to learn better when they are well fed; eating healthy meals has been linked to higher grades, better memory and alertness, and faster information processing.

According to Rwanda Education Board (REB), all the necessities of schools are catered for under the capitation grant, and the Government provides about Rwf56 support to each student’s school feeding per day.

Despite efforts by the Government, there are some parents who fall short when it comes to paying money for lunch at school.

David Bimenyimana, a student, says that at his school, lunch is mostly composed of cornbread and other carbohydrates, which, he says, is not a balanced diet.

“When we consume such foods on a daily basis without changing, it means the body has a deficiency of some vital nutrients. Due to his, some students even develop complications,” he says.

Bimenyimana says at his school, some of them are not allowed to have lunch because their parents are unable to pay for it. This, he says, makes it difficult for them to concentrate in class.

In most cases, he says, this affects their thinking capacity, and it alters their concentration. He adds that because of this, it is easy not to attend school on a daily basis.

Effects of poor nutrition on learners

Experts believe that nutrition and fitness are extremely important for the growing bodies of children, adolescents and young adults.

Alexis Mucumbitsi, the head of the Nutrition and Hygiene Department in National Early Childhood Care and Development Program (NECDP), says there is solid evidence that children who are hungry are not able to focus, so they have a low attention span, behavioural matters, and discipline issues in school.

According to scientific evidence, 80 per cent of the child’s brain grows within the first three years. Deficiencies in early learning, nutrition, and social relationships at such a stage could affect the child’s health and, physical, intellectual and social growth.

“The brain is made up of essential components and it relies on both macronutrients (fat, carbohydrates, protein) and micronutrients (vitamins and minerals) for its structure and function,” says Mucumbitsi.

He says that it is well known that severe nutritional deficiency can have a range of negative effects on the brain. For instance, he says, iron deficiency, even in the early stages, can decrease dopamine transmission, thus negatively impacting reasoning.

Deficiencies in other vitamins and minerals, specifically thiamine, Vitamin E, Vitamin B, iodine, and zinc, are shown to inhibit cognitive abilities and mental concentration, Mucumbitsi says.

With good nutrition, she says, students are likely to have fewer nonappearances and will attend classes more frequently.

“Learners will always have more time in class, and they will have fewer interruptions in learning over the course of the school year,” she says.

Additionally, Mbabazi notes that students’ behaviour may improve and cause fewer disruptions in the classroom, creating a better learning environment for each student in the class.

Researchers show that a higher quality diet is associated with better performance in exams, and other studies find that improving the quality of students’ diets leads to learners being on task more often; it also increases test scores, possibly increases reading trial marks, and encourages attendance.

How to tell a student with nutrition deficiencies

Erick Musengimana, a nutritionist at Rwanda Diabetes Association in Kigali, says teachers should look out for signs and symptoms in learners who have deficiency in nutrition.

For instance, he says, one of the common signs is a child exhibiting depression and anxiety.

He explains that it all starts in the brain and can be caused by nutritional deficiencies.

He says such children lack protein—a diet with a good amount of protein helps curb anxiety and depression.

Another indicator, Musengimana says, is a child with dry/flaky skin and hair. This is a nutritional imbalance that can be identified by teachers and parents.

However, he notes that this imbalance  can be corrected by parents or even schools by feeding kids on foods rich in fat soluble vitamins such as A,D,E and K2, which include green leafy vegetables like broccoli, cabbage, and spinach, among others.

He also points out that obesity is a sign of nutrition deficiency, and not that the child is healthy, as some people think.

Musengimana says food with no nutritional value makes the body hungry and because of this, one tends to eat more, especially processed foods.

“Such kids don’t feel satisfied when eating these kinds of food. This makes them consume more with less or no nutritional value, thus leading to obesity,” he says.

What parents should focus on

Mucumbitsi says that parents or school management should provide children with foods such as eggs.

He says they contain cholesterol, which is what covers the outer lining of brain cells. In addition, they contain fat-soluble vitamins as well as choline, selenium and Vitamin B12—all important for organ development.

Also, he notes that if possible, apples should be a part of any child’s nutrition.

“These nutritious fruits contain quercetin, which helps stimulate brain activity. Apples are easy to offer as a first food and throughout a baby’s transitional food stages,” he says.

Avocado should also been given to children.

“Avocado is a nutrient-dense fruit with healthy fat, vitamins and minerals that contribute to brain cell development and the texture is soft, making it easy to eat,” Musengimana says.

He adds that dairy products, including cheese and yoghurt, are rich sources of calcium. Besides its role in bone health, calcium forms an important part of the electrical signalling system within the brain.

Mucumbitsi says that although water is not food, it’s important for hydration, which helps to maintain blood flow and oxygen transport to all parts of the body.

Therefore, he advises caregivers to always give and encourage children to take as much water as possible. This, he says, can help prevent dehydration which can cause lethargy, irritability and reduced ability to stay alert and concentrate.