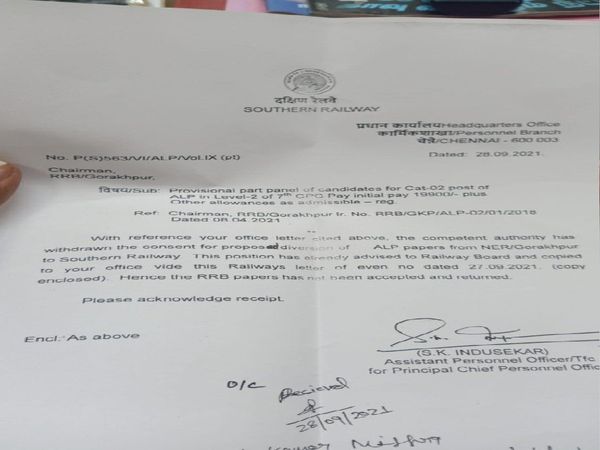 Madurai CPIM MP Su. Venkatesan wrote a letter to Union Railway Minister Ashwini Vaishnaw against the induction of 54 Assistant Loco pilots of Gorakhpur Railway Recurring Board (RRB) of North Eastern Railway to the 51 vacancies in the RRB Chennai in Southern railway and he termed it as illegal.

MP Venkatesan in his letter to the Union Railway Minister also stated that already 60 candidates who were selected by the RRB Chennai are in the stand with higher cut off marks and warned that there will be protests if the Railway goes ahead with the induction of Assistant Loco pilots from Gorakhpur in Chennai.

He further added in his letter, that, “As per the existing rules, a candidate can only apply in one railway zone and he should be appointed in that particular railway zone and anything against this rule lead to hampering of employment of candidates from that zone and it will disturb the democratic atmosphere.”

He further said, “At least 60% of the vacancies in the Southern Railway is secured by candidates who wrote exams in Hindi and 13% of the Assistant Loco pilots are occupied by Hindi speaking candidates and the cut-off marks of the candidates from Gorakhpur is very lower than the candidates who are in stand by in southern railways”.

After this objection was made, now the MP has informed the Southern railways has withdrawn the consent it gave for diversion of candidates from Gorakhpur to Chennai and the RRB Gorakhpur papers have been rejected and returned.