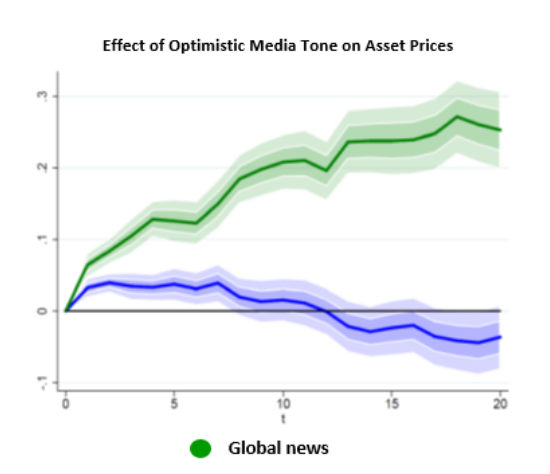 How do investors react to news? This question has been at the core of the financial research agenda for several decades. Now, two forces make this question even more pressing.

First, innovations in information technologies have dramatically increased the reach of financial and economic news and the speed at which it travels. Real time newswires, such as Reuters and Bloomberg, generate and disseminate information almost instantaneously to an ever-increasing set of market participants.

Second, a growing number of countries, especially emerging markets, have opened their financial markets to the rest of the world. This makes it possible for foreign news to affect local market conditions much more directly.

For a long time, however, studying the impact of news on investors’ behavior and asset prices remained a daunting task. What is news exactly? What does it talk about? And how can we identify, in a systematic way, good (or bad) news?

Fortunately, the last decade brought major advances in natural language processing—mining and analyzing large amounts of textual information to extract key features, such as topic or tone. Since then, successful examples of text mining in economics and finance—using both traditional news sources and social media content—have flourished.

Building on the most recent technologies, our IMF research project assessed the role of news on international asset prices using more than 4 million articles covering economic, financial, corporate, and political news published by Reuters worldwide between 1991 and 2015. The project assessed whether the tone of each article was bullish or bearish, using text-mining techniques to identify positive terms such as “gains,” “recovery,” or “confidence,” and negative ones such as “crisis,” “losses,” or “decline.” With this data, we constructed a daily news-based sentiment index for both advanced and emerging markets. We then asked whether optimism (or pessimism) in the news today could help predict future changes in asset prices.

We found that sudden changes in news sentiment had a significant impact on asset prices worldwide, confirming that media tone, in general, is a very good proxy for investor sentiment itself. It also highlights the role of foreign news (and foreign investors) rather than local news (and local investors) in driving local asset prices. (By foreign news, we mean news involving multiple countries and their interrelationships, as opposed to local news involving a single country.)

Although sudden optimism in global news sentiment generates a strong and permanent impact on asset prices around the world, the effect of optimism in local news was more muted and only temporary. From a technical perspective, the study offers another example of the power of text as an input to cutting-edge economic and financial research.

Importantly, the study also illustrates how new technologies—such as big data and text mining—can help institutions in their daily work. For instance, the mood captured in the news published around the world every day—the so-called “global news sentiment index”—mirrors other popular measures of global risk aversion, such as the CBOE Volatility Index, or VIX, which represents market expectations of volatility over the coming 30 days and is often called the “fear index.” However, the news-based index is ultimately a better predictor of future movements in international asset prices than the VIX.

We are still in the process of understanding why news sentiment matters so much, and why it seems to capture much more information about investors’ mood than other market-based indicators that are widely used. But the project already shows that monitoring news tone in real time is a very effective way to capture sudden changes in investor sentiment that would not be captured otherwise; which is key for financial surveillance.