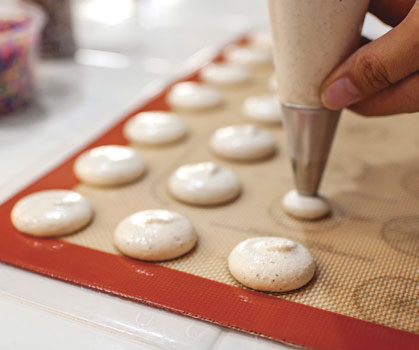 The first time Tiffany Domingo tasted a macaron, she was smitten. The delicate French sand-wich cookie that has replaced cupcakes as everyone’s favorite indulgence completely won her over.

“I just fell in love,” she says of her first bite, at Ginger Elizabeth Chocolates about five years ago. “It was not like any other cookie that I had ever had. It was so good. It’s something that you want to make on your own so that you know how much work goes into it.” Still swooning from the experience, Domingo attempted to bake macarons at home. The first batch, well, let’s just say it bore little resemblance to the cookie that first won her over. “Oh my gosh, the very first time was a complete flop. It did not come out as a macaron at all,” says Domingo, who learned to bake from her sister-in-law. After much trial and error (and consulting YouTube videos to figure out where she went wrong), Domingo was finally able to produce a macaron she could be proud of.

Soon orders started rolling in. They started with her sister-in-law, who ordered a batch for her son’s baptism celebration. And they kept coming. Before she knew it, Domingo was operating a bona fide business, Love & Macarons, from her home kitchen in Elk Grove.

Today, she bakes a whopping 1,000 or so macarons and sells them biweekly at the Midtown Farmers Market, where her stand has developed what can only be called a cult following. Customers go gaga for her salted caramel macarons—“It’s usually the first one to sell out”—and her macarons based on cartoon characters such as Hello Kitty, Pikachu and Totoro. Domingo also bakes macaron shells for The Parlor, which turns them into ice cream sandwiches. Demand for Domingo’s macarons is so strong that she and her husband are in the process of writing a business plan for a brick-and-mortar store. “We would love to have our own storefront,” she says. “A commercial kitchen would give us more space and make it much easier to keep up with demand.”

In the meantime, macaron fans will need to set their alarm clocks extra early on the Saturday mornings when Domingo is at the farmers market. She frequently sells out of her most popular flavors by midmorning.