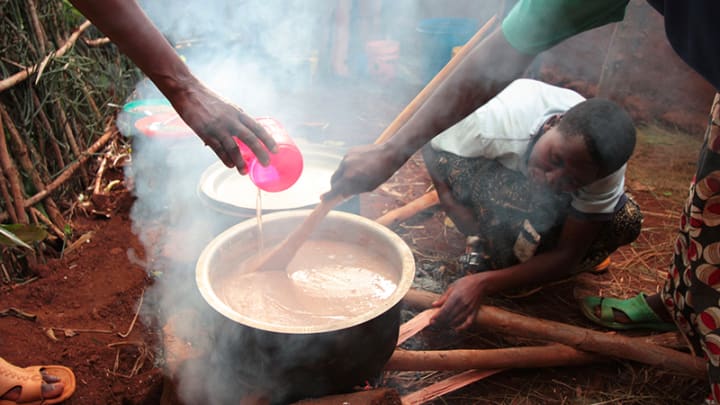 WASHINGTON — The year 2019 saw the release of several major data-driven reports demonstrating the uphill climb to meet key international nutrition goals. The EAT-Lancet Commission found the world is eating a diet much too high in animal-source foods, an annual report from UNICEF revealed that one-third of children are malnourished, and an IPCC report showed that climate change threatens land needed to secure the food system and supply nutritious food — just to name a few.

With five years left to meet the World Health Assembly goals and 10 to meet the Sustainable Development Goals, nutrition advocates say 2020 is a key year for the work remaining to eliminate hunger and ensure a diverse, nutritious, and sustainable diet for the nearly 8 billion people on the rapidly warming planet.

“Five, six, seven years ago, one could sit in a three hours’ agriculture meeting without hearing the word ‘nutrition’ even once. That now seems to be changing.”

“Next year will be more about taking those reports and kind of that global view and really trying to better understand: What does it mean for countries? What would it look like in Kenya? What would it look like in Indonesia to try to get towards the EAT-Lancet-type diet,” said Jessica Fanzo, EAT-Lancet commissioner and associate professor at Johns Hopkins University.

Fanzo said the world must now work to understand how a healthy food system can look different depending on the agricultural infrastructure and nutrition burden in a particular place.

Together with Lawrence Haddad, executive director at the Global Alliance for Improved Nutrition and 2018 World Food Prize winner, Fanzo developed a dashboard that will provide in-depth data about the current state of food systems spanning 200 indicators — such as nutrition, diets, climate change, and supply chains — to help policymakers determine what may need adjustment.

The coming year will also see a major nutrition gathering — to be accompanied by commitments — as well as the finalization of new guidelines that experts hope can establish the importance of taking a food-systems approach to achieving the SDGs.

In an attempt to create momentum toward eliminating malnutrition and meeting global goals, the Japanese government is hosting the Nutrition for Growth summit, or N4G, in December 2020. The event is designed to draw global attention to nutrition targets that remain an “unfinished agenda” and intends to position nutrition as a vital investment — one of the “best buys” in global development that sees $16 returned to the local economy for every $1 invested.

Commitments are expected to be made in three categories: “health,” which will focus on integrating nutrition into universal health coverage; “food,” on building food systems that promote nutrition, ensure producer livelihoods, and are climate-smart; and “resilience,” on addressing malnutrition in fragile and conflict-affected states.

The first Nutrition for Growth summit was held in 2013 in London, where stakeholders pledged to prevent at least 20 million children from being stunted. Over $4 billion was pledged for undernutrition, along with $19 billion in nutrition-sensitive investments to be spent by 2020.

As the Olympic Games kick off in Tokyo this July, the Gates Foundation will participate in an event expected to include significant pledges for nutrition and encourage countries and stakeholders to set their own goals leading into December.

Tying nutrition to the food system

Global nutrition actors are using Nutrition for Growth as a way to bring together different constituencies with a stake in improving nutrition outcomes. Nutrition has long been seen by other sectors as a health issue, but Purvi Mehta, the Asia lead for agriculture at the Gates Foundation, said that she is increasingly witnessing talk and ownership of nutrition issues in the agricultural sector.

“There is a very interesting and increasing trend in the last few years,” Mehta said. “I’ve been working with policymakers so closely in Africa and Asia and so forth. Five, six, seven years ago, one could sit in a three hours’ agriculture meeting without hearing the word ‘nutrition’ even once. That now seems to be changing.”

This attitude shift is necessary as the global community recognizes that nutrition, not just caloric intake, is central to food security, Mehta said. At the Gates Foundation, nutrition is one of the strategic goals for agricultural programs as the organization recognizes the importance of ensuring a food supply beyond yield.

Ruth Richardson, executive director of the Global Alliance for the Future of Food, said a systems approach is necessary because nutrition has long been disconnected from other pieces of the food system, particularly production.

“This is a systemic failure — it’s not an accident. It’s a system we’ve built, it’s a system we’ve designed. We need to redesign the whole system,” Richardson said. “We really have to think about how we’re framing these discussions in terms of what the solutions are. Because, again, what we grow and where we grow it and how we grow it and all those things matters so much in terms of overall nutritional outcomes for communities around the globe.”

The role of business

Business must also be intimately involved in progress on nutrition in 2020, said Jonathan Tench, head of GAIN’s U.S. office and global coordinator of the Scaling Up Nutrition Business Network.

“You can’t really move these days in the nutrition world without bumping into the role of business being brought up,” Tench said. “If you look at the number of global reports coming out about the state of food and nutrition, you can’t escape the fact that we’ve got to engage business.”

Tench said the SUN Business Network will be at key business forums throughout the year to continue the conversation about the private sector’s vital position in improving nutrition in the lead-up to Nutrition for Growth.

“Unlike previous N4G summits, the role of global business associations is kind of being spelled out,” Tench said. “Tokyo presents an opportunity to get nutrition on the radar of more and more companies, so that’s going to be a huge benefit. And then I think the conversation is getting more sophisticated and more detailed with companies, so really looking at what are some of the ways they can increase demand for nutritious foods as well as looking at some of the ways they can reformulate products.”

Large multinationals have a role to play in increasing the amount of nutritious food available to the world’s population, but small- and medium-sized enterprises are key in developing countries, Tench said. SUN Business Network will be continuing its pitch competitions — which provide SMEs with access to capital for innovative ideas around nutrition — in 2020.

In October, the Committee on World Food Security will hold a meeting in Rome to establish Voluntary Guidelines on Food Systems and Nutrition. Development of the guidelines began in 2017 with a multistakeholder policy process that saw the convening of five regional consultations to get input on how to push for coordinated policy among food, agriculture, and health sectors and to promote access to high-quality food.

That work will feed into a 2021 Food Systems Summit, which will stress the importance of taking a food-systems approach to achieving the SDGs. The summit is also designed to “offer a catalytic moment for global public mobilization and actionable commitments” on food system investment, according to the U.N.

If member states can agree on what should be invested in food systems, “I think that will be quite a moment that would lead into the U.N. summit in 2021,” Fanzo said.