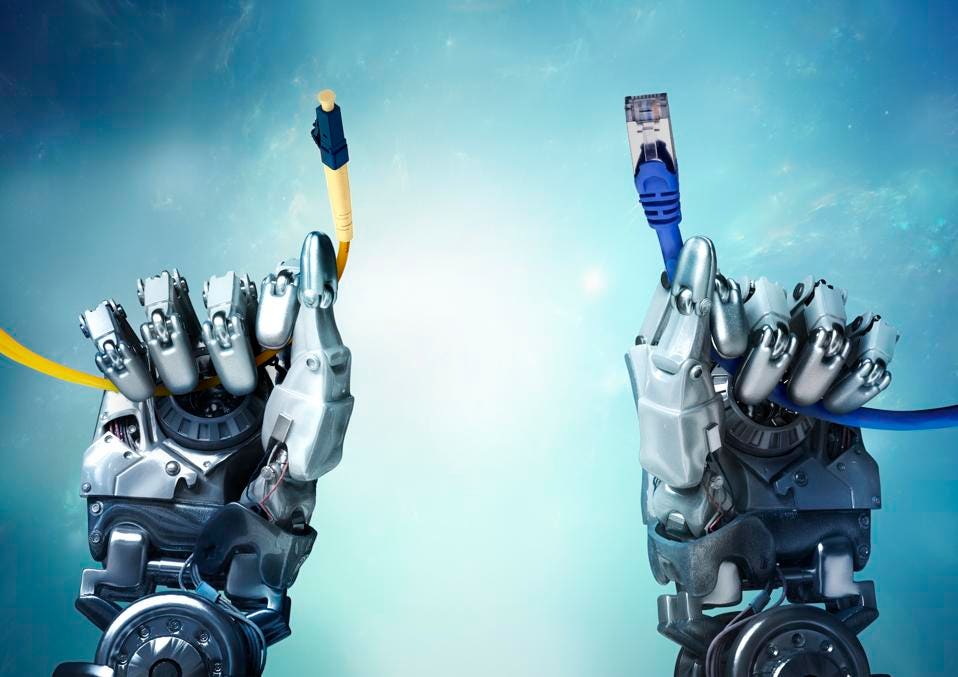 OBSERVATIONS FROM THE FINTECH SNARK TANK

Claims regarding the impact of artificial intelligence (AI) on banking are getting out of control.

[Financial] institutions will turn AI-enabled back-office operations into external services, both accelerating the rate at which these capabilities improve and necessitating others to become consumers of those capabilities to avoid falling behind.” (Source: World Economic Forum)

No they won’t. Establishing external services requires marketing and customer service. And it takes someone who knows how to manage a profit-center to run the show–which doesn’t usually describe the folks running those departments today.

You really think a lot of institutions are going to make the investments required to turn some AI-infused back-office operation into its own line of business?

Here’s a better bet: Amazon, Zillow, or Credit Karma will evolve their platforms to the point that it makes sense for them to provide “back-office operations” as a service. My money is on those three firms investing in AI faster than the majority of financial institutions.

And I hereby trademark the BOOaaS acronym.

Experts believe that implementing AI technologies could save the banking industry as much as $1 trillion in revenue by 2030.” (Source: Pymnts.com)

Really? How do you “save” revenue? Did they mean “increase” revenue? Or is there a trillion in dollars in potentially lost revenue that will be automagically saved by AI (and, if so, how exactly is that going to happen)?

The problem with forecasts like these is that they ignore the laws of supply and demand. Do you really believe that consumers want to spend an additional $1 trillion on financial services? Practically every conference speaker I hear says consumers already spend a ton of money on banking services and that they should be paying less, not more.

Nowhere in these outlandish forecasts of huge revenue increases is there any explanation of how AI will increase the demand for financial services.

The more likely reality is that AI will help some banks steal market share from others.

And that’s where the problems and opportunities lie.

Which Banks Are Investing in AI?

I don’t dispute the results. What I can’t help but wonder, however, is who did they survey? Unfortunately, the report doesn’t say.

According to Cornerstone’s What’s Going in Banking 2019 study, just 2% of mid-size financial institutions have already deployed chatbots, machine learning, or other AI technologies, and 5% have implemented robotic process automation (RPA).

In stark contrast to PwC’s survey, no more than 13% of mid-size institutions said they plan to invest in or implement chatbots, machine learning tools, or other AI technologies in 2019. 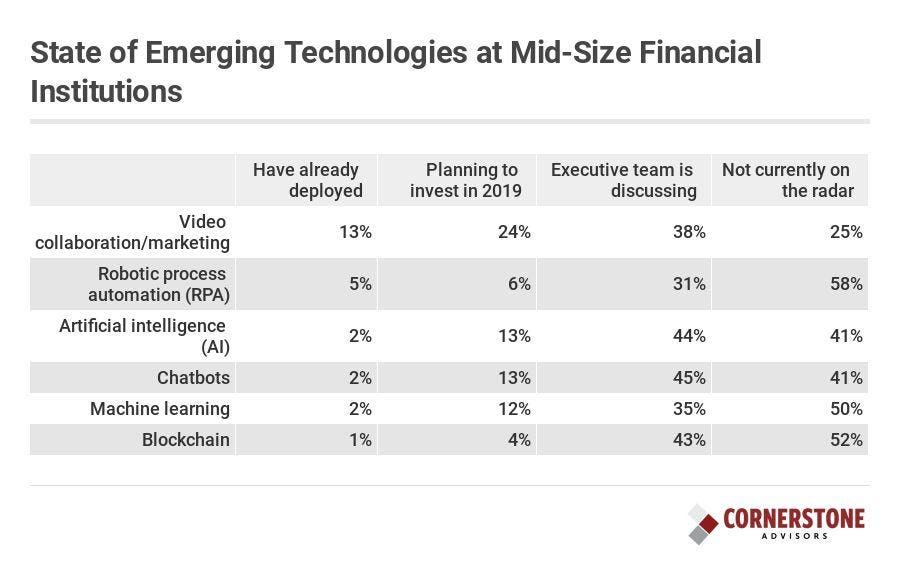 What are these institutions doing? For the most part, they’re either “talking” about AI, or the technologies aren’t even on their radar.

I have to conclude that PwC’s sample was dominated by large and/or non-US-based banks. If true, that means we’ll see a growing gap in AI utilization between large and small banks in the next few years.

The investment discrepancy isn’t the only factor causing the gap. Data is another critical factor.

A lot of the far-fetched claims of AI’s potential impact fail to take into account the Fintech Snark Tank’s Second Law of AI:

Without a sufficient quantity and quality of data, AI technology is pretty much useless (or suspect).”

If you need proof of that, take a look at the controversy that Amazon caused with its AI-based recruiting tools which were biased against female job applicants. AI algorithms are only as good as the data it has to work with.

And therein lies the challenge for smaller financial institutions: They don’t have enough data–quantity- or quality-wise–to make AI work.

This is less of an issue on fraud- and risk management-related issues given the level of cooperation among players, or with back-office operations where vendors can develop algorithms using data (anonymously) pooled from across their client base.

But on the marketing/revenue-enhancement side, the data simply isn’t there–either internally at the institution or vendor level. There is no feedback loop between advice, suggestions, and recommended actions that a bank provides to customers and the consumers’ end results. It’s hard enough (if not impossible) to even track whether or not a consumer acted upon the recommendation or advice.

While this is true for both large and small institutions, the megabanks have two advantages:

The result: The megabanks’ AI efforts will position them to capture even more market share than they already have.

A recent survey from Ascend asked marketers which marketing techniques were most effective for hyper-personalization strategies. AI-driven chatbots were the least-mentioned approach. Why? Insufficient quality and quantity of data. 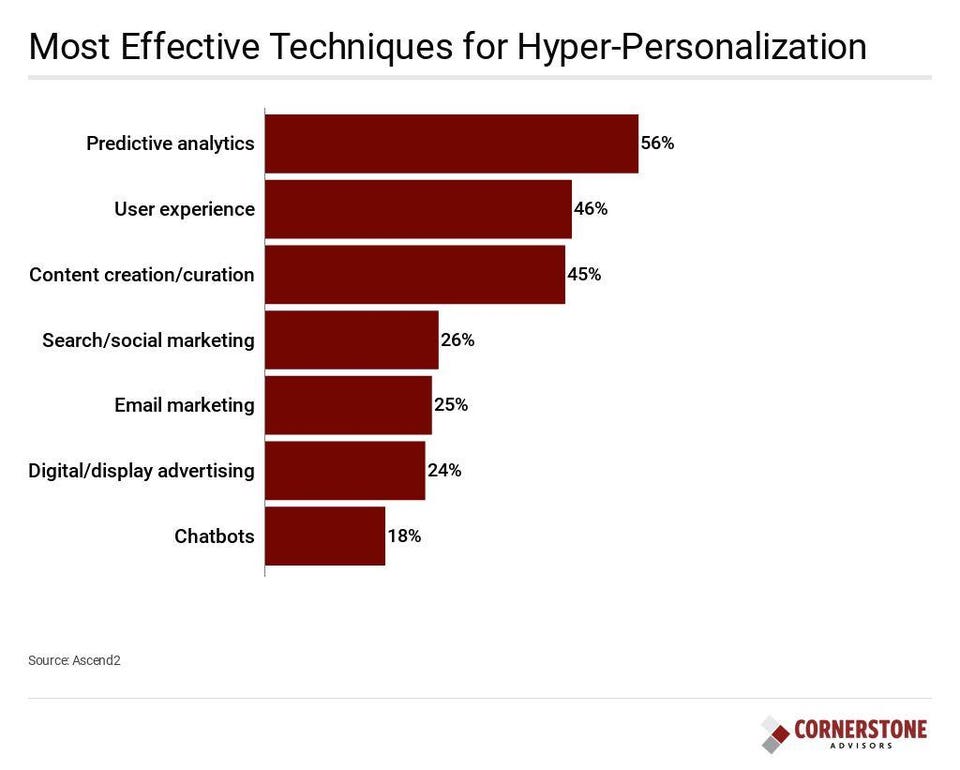 Mid-sized institutions will need to collaborate to share data to close the AI gap, or vendors will need to step in to provide the needed services.

I wouldn’t be surprised to see a firm like MX stepping into the void to help smaller banks and credit unions. Plaid–building on its recent Quovo acquisition–may be another, but it will take a lot more than just account data to give mid-size institutions the ammunition they need to fight the AI war with the megabanks.