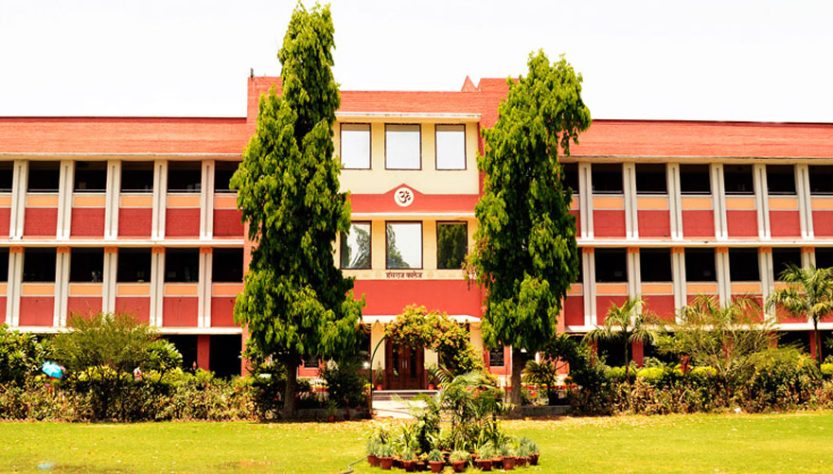 The students and teachers of Hansraj College at the University of Delhi (DU) have launched an online petition alleging that a gaushala (cow shelter) called Swami Dayanand Saraswati Gau-Samwardhan ewam Anusandhan Kendra has been built on land designated for a women’s hostel. The petition condemns the construction of a cow shelter within college premises, while asking the authorities to build a women’s hostel – a plan which has been on hold for several years.

Contradicting her own old 2016 statement and denying all allegations, Rama Sharma, the principal of Hansraj College, told The Wire that “There is no such approved land for women’s hostel as of now”. She added that a women’s hostel will be built in Hansraj College after reworking the college’s master plan. She called the controversial Swami Dayanand Saraswati Gau-Samwardhan ewam Anusandhan Kendra just another research centre, “comprising a single cow for purely academic purposes”.

“The need for a women hostel is immediate. Women coming from outside Delhi find it terribly difficult to find safe and affordable housing in the city. Many women applicants prefer admission to a college with a hostel because their parents feel more comfortable if they are accommodated on the campus, leading to a dismal 62:38 male to female ratio at Hansraj College. It is utterly disrespectful to me as a woman to find a full-fledged gaushala been built on the land reserved for a women’s hostel when colleges are closed due to the COVID-19 pandemic,” said Sama, a second-year student at Hansraj College.

Teachers across the university have questioned the rationale behind the measure. A faculty member at Hansraj College, requesting anonymity, said, “Initially, I thought it was a joke since there has been no communication of any kind or staff council meetings about it. If it is for research purposes, then it should have happened through college forums which also isn’t the case. I am not sure as per which rule, it [gaushala] is even allowed since our college is a public-funded secular educational institution?”

Another gaushala with the name Gaukul has also been found in Laxmibai College at DU, which has been functioning since 2020. A faculty member at the college, requesting anonymity, told The Wire that the place is used for various purposes including the “worshipping of the cows, recitation of Mrityunjaya japa, Sundar Kand from the Ramayana and periodic Bhoomi puja.”

Similarly, Mrityunjaya japa is being played constantly on loudspeakers in the corridors of the Hansraj College. Sharma told The Wire that it is merely a “new announcement system” which has been installed in the college and Mrityunjaya japa is part of the monthly conducted havans (prayer rituals) which is played only during morning and evening for “positive energy”.

While emphasising upon the recent sudden changes in college atmosphere, involving a surge in right-wing webinars, a faculty member, also requesting anonymity, questioned the playing of these Mrityumjaya japa. “Havans still give persons belonging from other religious backgrounds a choice to either attend them or not. However, it is questionable why only Mrityumjaya japa, and not any other religious hymn like Gurbani, is being played on loudspeakers in a public-funded educational institution,” the faculty member asked.

According to the Indian Express, university officials are not even sure if similar initiatives of cow research exist in other DU colleges. “I was not even aware of this particular [Hansraj College] project. It must be an initiative taken at the college’s level,” said registrar Vikas Gupta.

Abha Dev Habib, a faculty member at Miranda House, told The Wire, “Today colleges are being turned into gaushalas! Having a gaushala when that space can be used in thousands of ways, is a declaration by the heads of these institutions that they are aligned to the ideology of the present-day government. The presence of a gaushala is part of divisive politics.”

What is the college administration saying?

Meanwhile, she also elaborated on the need for a cow-based research centre that would provide “pure milk and ghee” to students and for the monthly havans conducted on the campus.

“Ours is a DAV Trust college like Khalsa and St. Stephen’s College, and its base is the Arya Samaj. In line with that tradition, we hold a havan on the first day of every month, which may be attended by students, teachers and non-teaching staff to felicitate those who have their birthdays in that month. For this, we need to go to the market to buy things that we need to offer to the flame, such as pure ghee. We can be self-sufficient now in this,” she said.

“Students from different departments of the college can make start-ups based on this initiative by the college. We are also planning to install a gobar gas plant. If the research proves to be useful and beneficial, we shall expand the centre,” she added.

Gaurav Kumar, the convener of Swami Dayanand Saraswati Gau-Samwardhan ewam Anusandhan Kendra, further highlighted the need for “logical research” of cow-related products especially gaumutra (cow urine), cow dung and cow milk which is considered as “Amrit” as per popular sayings and therefore must be academically tested.”

On the question of how these researches shall be conducted, Kumar asserted that the project is in its “infancy stage” and nothing is clear and permanent as of now, including the name of the centre, which is causing controversy. “It is just a pilot project,” he said.

A question on secularism in a public-funded college

According to Kumar, the plan to make the research centre started before the COVID-19 pandemic. “The planning for the centre was started two to three years ago by the college administration itself,” he said.

“The research centre shall also work for mushroom cultivation and the plan is to also make an eco-village since people living in towns and cities want to see villages,” he added.

The description and timeline of the research centre provided by Kumar are quite similar to what we have found in Laxmibai College, whose Gaukul (where two cows reside) and Mera Gaun (like the proposed eco-village in Hansraj College) have been operational since 2020. They are built near the houses of six non-teaching staff of Laxmibai college, who used to reside there before they were asked to vacate their houses and are now living outside the college premises in rented rooms.

The Gaukul consists of a gobar-gas plant where gobar agarbattis, dhoopbattis and manure are being manufactured by the college gardeners. Meanwhile, Mera Gaun is being used for mushroom and vegetable cultivation. The entire area is often used for Hindu religious activities such as recitation of Mrityunjaya Japa, Sundar Kand from the Ramayana and periodic Bhoomi (land) and Gau (cow) pujan (worship).

While highlighting the unhygienic conditions which the entire project is causing in the college, such as providing a breeding ground for mosquitos, foul smells, etc., a faculty member, requesting anonymity, questioned the college’s commitment towards secularism and transparency.

“As per which rules and guidelines, all this is being allowed in secular public-funded educational institutions? Who has funded the construction and maintenance of it? Where is the milk going? Who should be held responsible for such unhygienic conditions?” the faculty member said.

Sharma also assured The Wire that no new cows will be added. “I can guarantee you, only one cow will be there, and it will not be a gaushala,” she said. However, according to a faculty member at the Laxmibai College, there was also only one cow when “Gaukul” was started. “The second one is the calf of the older cow,” the faculty noted.

Is Hansraj College being saffronised?

In addition to the above-mentioned developments, Mushfin, a third-year student at Hansraj College, told The Wire that the environment of the college since his first year has steadily turned “majoritarian”.

“From conducting webinars to stifling our speech on important issues, there has been a constant rise in the right-wing activities in the last three years in the college. Recently, the philosophy department conducted a seminar inviting a person from non-academic background whose NGO was affiliated with the Rashtriya Swayamsevak Sangh (RSS) and he was openly asking students to join it, and this is happening everywhere,” he said.

The webinar was organised on January 12 by the philosophy department’s head, where Suresh Jain, who is an associate of Bharat Vikas Parishad and the RSS, was invited to speak on Swami Vivekananda’s philosophical ideals. As per other students as well, the questions and answers were selected by the organisers in a way that glorified the Sangh parivar.

On the other hand, several girl students told The Wire that they have been facing harassment from ABVP (Akhil Bharatiya Vidyarthi Parishad) for launching an online petition for the women’s hostel and condemning the new research centre. Sama said, “I feel cows are more protected and respected than girls in our country. Members of the ABVP, who are not even from our college, are trolling, spamming and abusing us, which is not just sad but downright scary.”

Shatakshi, another second-year girl student at Hansraj College, also said, “The campaign for Hansraj’s women’s hostel was met with several attempts of sabotage. Many male students from the ABVP joined our WhatsApp group and tried to disrupt our campaign by trolling and abusing us. It deeply saddened me to see that demanding our basic rights would be met with such hostility.”