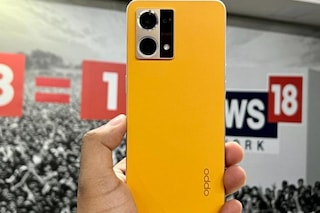 The Oppo F21 Pro series will launch in India on April 12, the company revealed earlier today. The launch of the latest Oppo F-series smartphones is taking place almost exactly a year after the debut of Oppo 19 series. The new series will include Oppo F21 Pro 4G and Oppo F21 Pro 5G, but it remains unclear whether we’ll see the launch of Oppo F21 Pro+ 5G. The official website highlights the design and we can notice the phones in a Sunset Orange leather rear case.

Notably, the rear camera module will include a 64-megapixel primary along with two more sensors. The secondary camera has a ring light for notification alerts that takes inspiration from Oppo Reno 7 Pro and Reno 7 5G. The rear module further has a dual-tone finish, at least for the Sunset Orange variant, which is quite rare among smartphones.

Other details of the smartphone remain unclear, and the company will share more details in the coming days. Notably, the Oppo F21 Pro 4G variant looks similar to the Oppo Reno 7 4G that launched in Indonesia earlier this week. If the speculation is accurate, we can expect the device to feature a 6.43-inch Full-HD+ AMOLED display with a 90Hz refresh rate. The triple rear camera setup may include a 64-megapixel primary sensor and two 2-megapixel sensors. On the front, it may carry a 32-megapixel selfie sensor. Connectivity options may include 4G LTE, Wi-Fi 5, Bluetooth v5.1, NFC, USB Type-C, and a 3.5mm headphone jack. It could be powered by the Snapdragon 680 SoC.