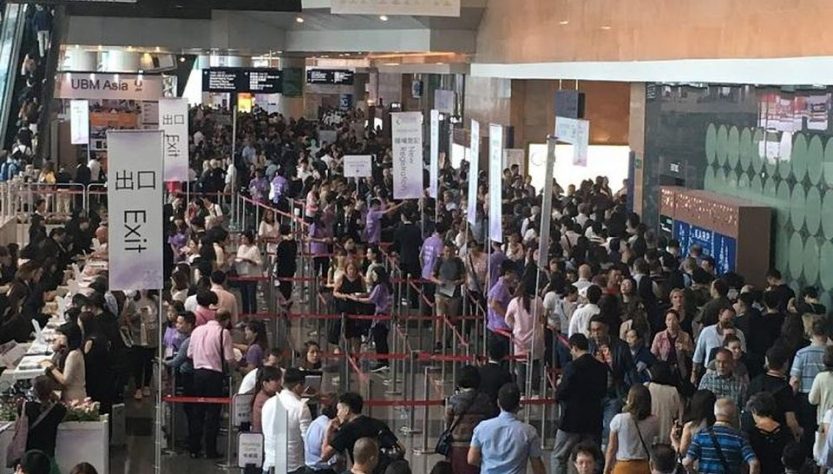 The September Hong Kong Jewellery & Gem Fair will be remembered not so much for the business being conducted, the new products on display or the special events that were held, but for the destructive force of Typhoon Mangkhut, which hit Hong Kong September 16. However, despite the storm the show went on and exhibitors were largely pleased with the results.

Typhoons are a way of life for the residents of Hong Kong but this storm was different. It measured as a Signal No. 10, the highest level of tropical cyclone warning signals in Hong Kong, for 10 hours, making it one of the strongest storms in the city’s history. News reports compared the winds to a Category 5 hurricane. It’s also considered the strongest storm in the world this year. It tore through residential and office towers, felled construction equipment and destroyed less fortified structures. It toppled trees, stopped all public transportation and caused severe flooding along coastal areas. 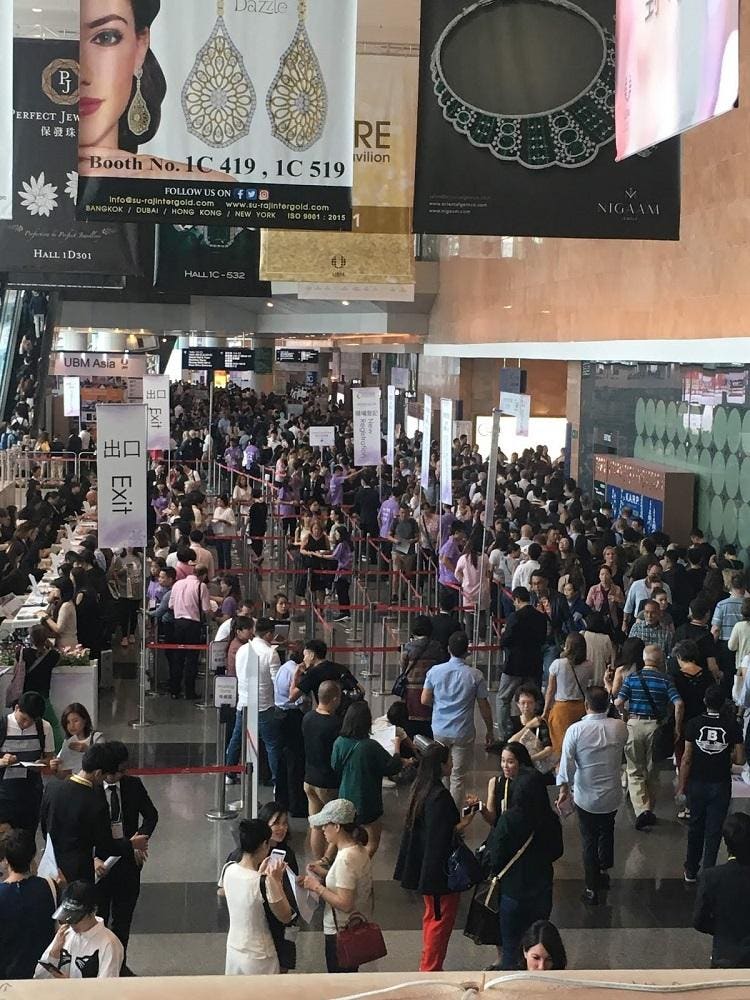 The super typhoon caused the full-day closure of the Hong Kong fair at both locations for the first time in its 36-year history. It also caused the one-day postponement of the JNA Awards gala dinner. The fact the gala was even held at the storm-damaged Intercontinental Hotel Hong Kong was a testament to hotel employees and the staff of UBM Asia, which owns and operates the show. The same could be said for the continuation of the show following the storm.

The September Hong Kong fair is considered one of the largest, if not the largest, jewelry trade fairs in the world. This year, it set a record in the number of exhibitors with 3,700. Years ago the fair became so large that it split into two facilities: The AsiaWorld-Expo by the Hong Kong International Airport, for exhibitors of diamonds, colored gems, pearls and other jewelry making materials; and at the Hong Kong Convention & Exhibition Centre in the center of the city for finished jewels, which range from inexpensive steel jewels to the highest of high jewelry. The dates are staggered as well with the show at AsiaWorld-Expo held September 12 – 16 and the event at Hong Kong convention center held September 14 – 18. 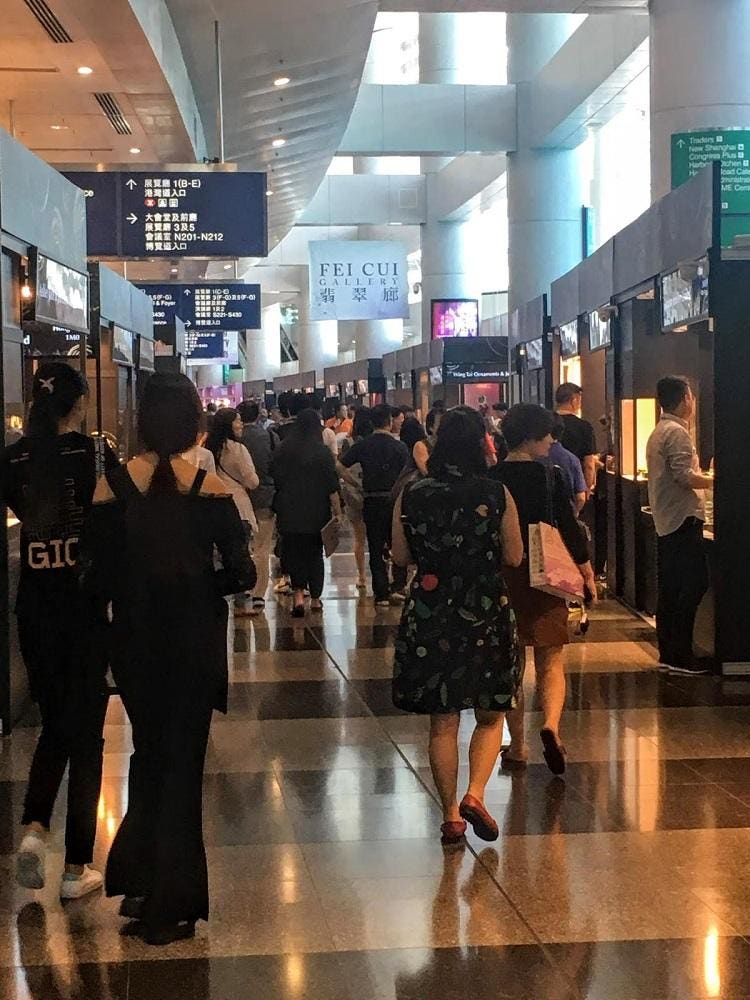 At the annual press conference on September 14 in the Hong Kong convention center, which coincides with the opening of the finished jewelry portion of the show, eight officials representing various Hong Kong and China trade associations reported strong sales for the first half of the year but feared that U.S. and China trade tensions and the strengthening U.S. dollar would cause difficulties for the remainder of 2018. In addition, a few officials said the industry has to come to grips with the changing buying habits of younger Chinese consumers who use social media and eCommerce. The super typhoon was still too far away to warrant discussion.

Lawrence Ma, founding president of the Diamond Federation of Hong Kong, said diamond sales increased by 8.7 percent for the first half of the year in Hong Kong. However, he added that he is “cautiously optimistic” when it comes to business at the September Hong Kong jewelry fair. “I expect a good show but not necessarily a great show.” 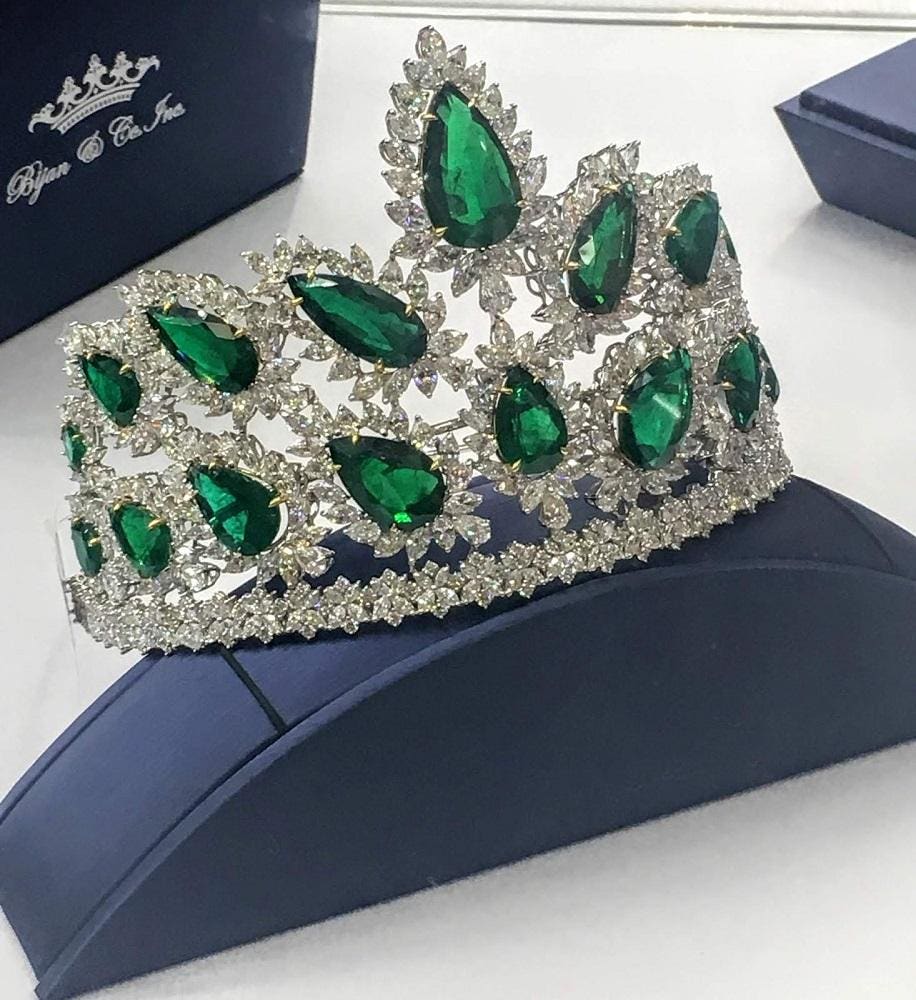 An emerald and diamond tiara by Bijan & CoAnthony DeMarco

Ken Lo, chairman of the Hong Kong Jewellery and Jade Manufacturers Association, said his organization saw double digit sales gains for the first half of the year but agreed with Ma that events outside their influence could dampen sales for the rest of the year. “I’m very cautious at the year’s end about what’s going to happen,” he said.

This year’s fair also marks the formal announcement that UBM Asia has merged with Informa, a London-based company that bills itself as an international business-to-business information services group. In addition, Wolfram Diener, senior VP of UBM Asia for seven years and a big presence at the Hong Kong jewelry fairs, will be leaving UBM Asia. After 22 years of living in Hong Kong and China, the German native has accepted a new position as managing director of Messe Düsseldorf.

Diener, 57, led his last press conference at the Hong Kong jewelry fair calling it his “final curtain” and introducing his replacement, his close friend, David Bondi, COO for Informa’s Global Exhibitions Division, Asia Pacific and President of Informa China, who was in attendance.

In the rest of his presentation Diener noted that Thailand, with 400 exhibitors of finished jewels, gemstones and supplies, is the largest contingent at the fair, outside of exhibitors from Hong Kong and China. He added there is strong participation from Japan and an increase in exhibitors from Turkey.

Gem and pearl exhibitors report strong sales despite the storm

Certainly business was negatively impacted at the show due to the super typhoon. Not only with the one-day closure but with buyers leaving early before the storm arrived. But most exhibitors I spoke with were not only satisfied with their sales but even happy—particularly the gem dealers who only lost business on the last day of the materials portion of the fair. They expressed these views on the second day of the show and after its close.

“It was very busy yesterday and it remains busy today,” Gary Roskin, executive director of the International Colored Gemstone Association, said during the second day of the materials portion of the fair. 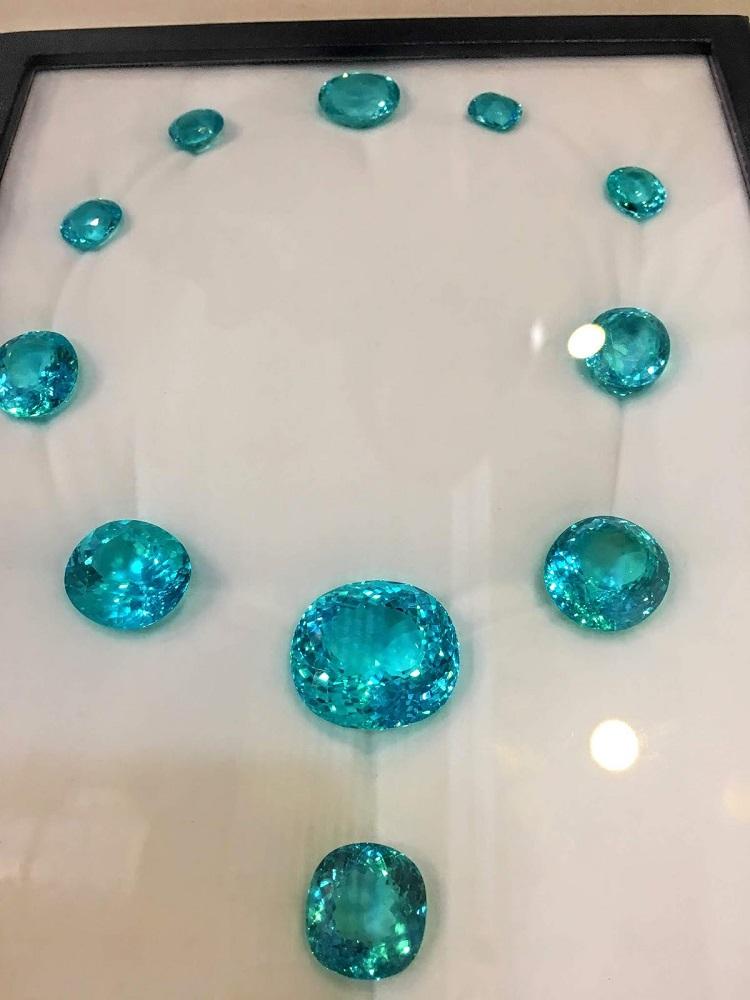